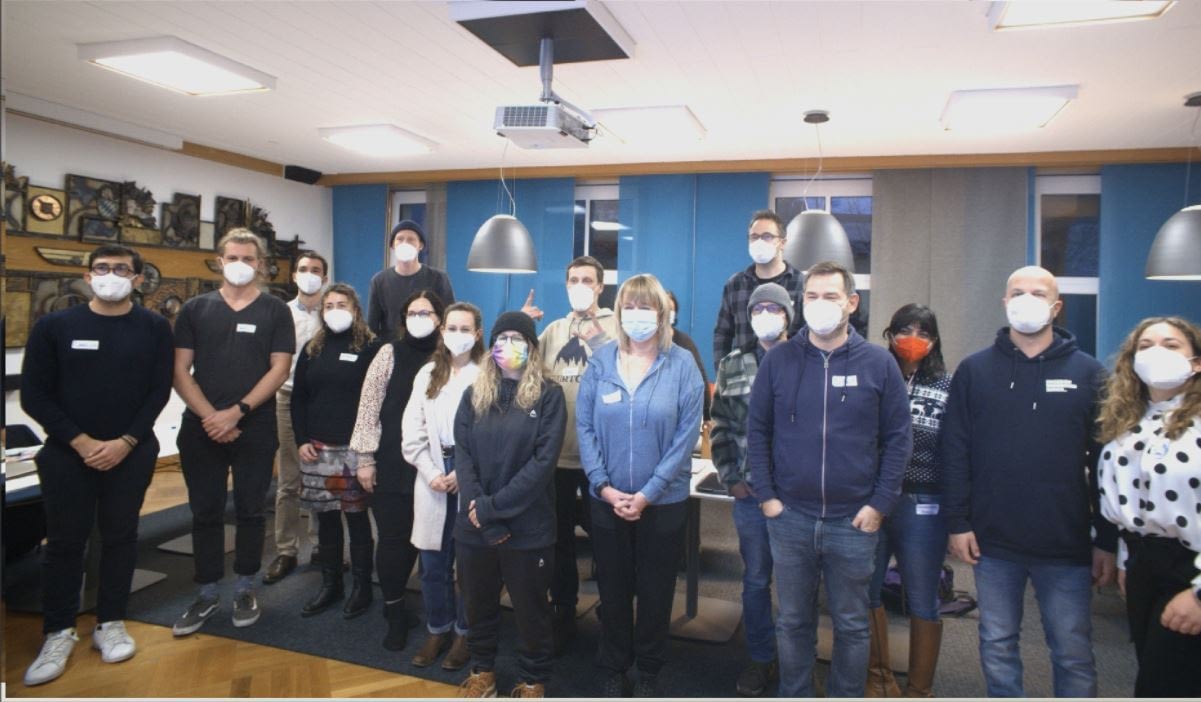 The World Snowboard Federation and the CSCF – Sport Integrity Group take a step forward for the safeguarding of young snowboard riders.

On December 6th 2021, trainers and managers come from all over Europe to Planegg Germany, to participate in an intensive training on integrity topics. These key players will be empowered with knowledge and pedagogical tools to raise awareness among the youngest generations of snowboard riders during local, regional, and national events this winter.

The topics covered during the session were:

This activity builds on from the findings of the SafeShred project, co-financed by the Erasmus+ program of the European Union.

The relay baton is passed: see you on the slopes!

A special thanks to Snowboard Germany for hosting the activity in such special conditions.

And to the CSCF team of experts:

As well as to the WSF coordinators, Boris Kilvinger and Floriane Poncet.

The “Play Clean” programme was launched by the International Volleyball Federation (FIVB) at the end of September.

CSCF Consulting developed the anti-doping educational content for the “Play Clean” programme, a tool that assists in protecting clean sport and athletes, based on the agreement signed with the International Volleyball Federation (FIVB)

FIVB in order to inform and educate participants on their rights and responsibilities in regard to anti-doping. The interactive learning experience incorporates lessons and quizzes on a range of topics and has been updated to fully align with changes made to the World Anti-Doping Code in 2021.

“CSCF Consulting is delighted to support the FIVB’s commendable efforts in sport integrity by developing such an interactive tool. We strongly believe that education is the best way to keep a clean field and protect our players and athletes in any matter that goes against their integrity. This is why we have endeavored to provide this support for many federations and related stakeholders in the last 5 years,” said Norbert Rubicsek, Director of CSCF Consulting.

“Play Clean” is a mandatory requirement for athletes and accredited medical personnel to participate in FIVB and world competitions. The programme will be updated every Olympic cycle, in addition to when major changes are made to the Code.

The Integriball Erasmus Plus project came to its end on the 30th of November with its final administrative session and the closing conference. The project had a two-year run from the beginning of 2020 to the end of 2021, during which sport integrity experts developed extensive curricula and disseminated them through a multitude of training sessions. With the help of the Integriball project, thousands of women and young footballers can now play in a safer environment.

The Administrative Session and Closing Conference

On the 30th of November, the administrative session and closing conference of the Integriball Erasmus Plus project, hosted by GLMS – and coordinated by CSCF – Foundation for Sport Integrity, were held. The online session had active participation and collaboration from more than 50 participants between partners and guests, besides the partners of the project who were as follows:

The EU-funded Integriball Erasmus + project was completed after 2 years (2020-2021) of dedication, education and awareness raising on tackling match-fixing in European football for young boys and girls and senior women footballers. It identified and addressing the issue from the different country partners of Belgium, the Czech Republic, Malta, Greece, and Cyprus.

The project has a thorough research basis, the results and the curricula were based on desk research, survey research and a comprehensive interview phase conducted throughout 2020.

As the first step of this phase, Ghent University carried out desk research on the state of play of sport manipulation in all five countries, and Ariosz surveyed the future participants of Integriball about their opinions and knowledge on the topic. During the interview phase, the experts of CSCF Foundation for Sport Integrity, together with the experts of the local partners (in their respective countries) and GLMS, conducted more than 60 interviews from all the 5 countries. The interviewees represented different stakeholders in the field of football (football players, coaches, integrity officers), through law enforcement to the highest level of policy making.

All this work resulted in a comprehensive understanding of the present state of match-fixing and sport manipulation in women’s and grassroots football in each country.

The knowledge collected from the countries of Integriball gave a great fundament for the curricula which was developed by and for all the partners of the projects. For the latter guide, CSCF implemented a train-the-trainers method, where representatives assigned by their federations were taught by experts to be able to train the athletes in their organizations. These documents were built to introduce the phenomenon of sport manipulation (Match-fixing) on how to recognize manipulation and what to do, and who to turn to if sport manipulation is committed.

The information was translated into the languages of the partner countries and tested at the pilot sessions where the knowledge was delivered to players of all the 5 country partners with the involvement of the 5 football associations: RBFA, PASP, CRFA, HFF, MFA as well as GLMS and CSCF. This was followed by the train the trainers sessions for the future trainers in the partner countries.

The team of experts that participated in these activities includes academics, sport integrity, and betting specialists, specialists on whistleblowing, and investigators with sound experience in building and educating good governance and strategies of sports and combating serious crimes. The experts performed background analyses and field-work interviews to help us research the various facets of sport corruption.

By using CSCF international experts’ knowledge in the domain and the support of the country partners, more than 700 athletes and trainers were trained through pilot sessions, train the trainers and delivery by the trainers to players in 2021.

The sessions by the trained trainers have already started in the partner countries. The knowledge of integrity has been spread around the countries amongst youth and women footballers and is planned to directly impact more than 10,000 people in the long term.

The Integriball trainings will continue in all the countries after the project ends.

The federations and union have committed to using the developed material to maintain knowledge and raise awareness among this specific target group of football players on fighting sport manipulation in Belgium, Cyprus, the Czech Republic, Greece, and Malta.

The knowledge of the project is expected to help to develop a product which will be adaptable for use not only in the countries of the Partners but also in other European countries and beyond.

During the project’s lifetime, the knowledge on the topic was constantly measured through surveys. Based on the results of the survey, it could be stated that while the athletes did not have much first-hand experience with match-fixing, which is definitely a positive sign, most of them also had not taken part in any sport manipulation-related education before. So, generally, they had little knowledge about the topic. There were other factors signaling the importance of integrity education for them, such as a big proportion of them saying that match-fixing was very common in football, or the fact that half of the respondents knew someone who was addicted to gambling. As the project was going on, further surveying showed that the knowledge and awareness of participants about sport manipulation was growing, and that they were satisfied with the content and education they were receiving.

“I truly believe that the outputs of the Integriball Erasmus plus project, that were developed meticulously and delivered widely, will help to prepare not only the participating federation and union football players to be very successful, cautious and knowledgeable sportsmen and sportswomen, but they can also be transferred beyond these countries, thus benefiting the wider society of Europe and beyond,” Norbert Rubicsek, CSCF Director.

We all stand against manipulation in sport!

The official launch of the new, EU-funded Integriball ERASMUS+ Project took place on the 23rd of January 2020 in Brussels during the Project’s kick off meeting. The meeting was hosted at the Brussels’ office of UEFA’s. UEFA is a supporting partner of this new project, which aims to educate on the dangers of match-fixing in football.

The “Integriball Grassroots and Women’s football” Project will run from January 2020 until December 2021 and takes on a unique approach, developing and disseminating a comprehensive education programme focusing on protecting grassroots (U16-18) and women’s football players in Belgium, Cyprus, Czech Republic, Greece, and Malta from threats of sport manipulation (match-fixing) and other related sport-regulatory or criminal activities, in partnership with the respective dedicated Football Federations.

The Project is implemented by CSCF Foundation for Sport Integrity, which has run other successful projects including Integrisport ERASMUS+ targeting law enforcement and judiciary in investigating cases of sports manipulations. Integriball’s implementation will be further supported by partnerships with the sport integrity body of the global lottery sector, GLMS, with its strong expertise on sports betting and intelligence, as well as the renowned Ghent University playing a vital role in research activities. Partner organizations in particular will add further credibility to the Project by contributing via their network and expertise.

All project partners concluded that addressing the integrity of young athletes at the very start of their sporting careers, as well as raising awareness among female athletes of one of the fastest growing sports should be a priority; a priority that will definitely benefit from a multidisciplinary and transnational approach to tackling sport manipulations. With this approach, the Project aims to help to equip the involved football federations with effective tools and networks to effectively fight against sport manipulation and other sport integrity breaches.

The “Integriball Grassroots and Women’s football” Project is officially supported in this fight by UEFA and the Council of Europe.

If you are interested in the program, please visit us at https://integriball.weebly.com/ and visit or email us: integriball@cscfsport.com.